San Francisco has lost a great number of its classic movie theaters. Neighborhood and business communities have been working together with the City to devise ways to save and reuse those irreplaceable buildings that have managed to survive.

Elsewhere in the U.S. theaters once facing demolition have been restored to become vital cultural assets to their communities, like Canton, Ohio's Palace Theater, and Columbus' magnificent Ohio Theater. In both cases these landmarked theaters' exteriors and interiors have been faithfully restored and continue to this day to screen films, present concerts and host civic events. 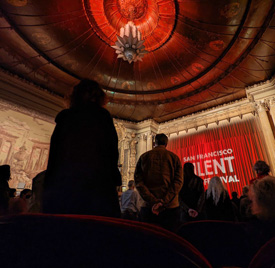 For decades San Francisco's last remaining movie palace, The Castro Theatre, has hosted the San Francisco International Film Festival, the San Francisco Silent Film Society, Frameline, Noir City, and numerous international film festivals. Designed by renowned architect Timothy Pflueger in 1922, the 1400+ seat theater was landmarked in 1976. Currently the Castro's future as a movie theater is threatened by a redesign that would remove the orchestra's raked seating. Pending is an expanded landmark designation submitted by San Francisco District 8 Supervisor Rafael Mandelman to protect such character-defining features of the theater's interior. In August 2022 The San Francisco Small Business Commission declined a measure to support the redesign proposed by Another Planet Entertainment.

December 7, 2022: In a controversial move San Francisco's Historic Preservation Commission voted to delay a decision on the protective landmark measure until February 1, 2023, despite unanimous community objections voiced at the hearing.

An online petition in support of retaining the raked seating and further protecting the theater's interior is available at Change.org here.

“The Castro is the center of San Francisco's vibrant film scene. The theater is home to every major film festival as well as host to many special film events from big Hollywood premieres to community sing-a-longs. These events and the various independent film and performance festivals that use the theater enrich the cultural life of the City. And they all depend on the traditional theater seating at the Castro.”
—The Future of the Castro Theatre, San Francisco Silent Film Festival

January 26, 2023: Friends of the Castro Theatre Coalition held a town hall at the Holy Redeemer Roman Catholic Church in the Castro, ahead of two public meetings on interior landmarking. The meeting "came, coincidentally, just after a letter from the Nasser family and Another Planet Entertainment was released proposing interest that a member of another coalition enter into a sublease agreement with them."
—Emotions Run High at Castro Theatre Town Hall, John Ferrannini, Bay Area Reporter

→ View a list of San Francisco movie house closings from 1978 to the present.

Listings are grouped by Art Houses and Repertory Cinemas, First Run Theaters, and Mission Street and Neighorbhood Theaters. Theater names now link to corresponding pages on the encyclopedic Cinema Treasures website providing historical background info for each theater, photos, mapping, as well as discussion threads that offer first-hand anecdotes about the lives of these theaters. 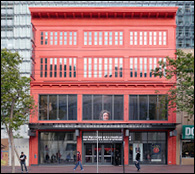 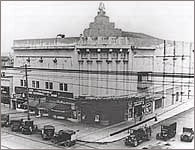 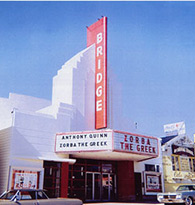 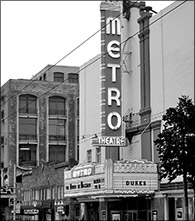 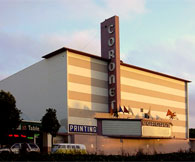 December, 2017: The Harding Theater at 600 Divisadero has been renovated and reopened as The Emporium, a gaming archive with the ability to host live music and DJ events, plus movie nights with three large projector screens. Previously the Harding had been sold to a condo developer intending to demolish this 1926 Reid single-screen theater, a film and live performance venue that featured vaudeville performances in its early days and live concerts from groups like The Grateful Dead in the 60s. However, local and citywide opposition bolstered by statewide protection of this historic property (CEQA) halted plans for its complete demolition or modifications to the building that would compromise its ability to be a viable theater. READ MORE

May, 2015: The American Conservatory Theater has re-opened the Strand Theater, now to play a center-stage role in San Francisco's revitalized Mid-Market area. Purchased in 2012, A.C.T. converted the theater to a 300-seat performing arts venue that includes a restaurant, classrooms and rehearsal space. Per artistic director Carey Perloff, "This is a great chance to have a small, more intimate space in which we can take the kinds of artistic risks on new material and young artists and new forms that are more challenging to do in a 1,000-seat theater." Pre-renovation 2013 photos of the interior can be found here. See also Aaron Sankin's renovation coverage on SF Huffington Post. View video coverage of the Strand's groundbreaking ceremony here. Additional historical information and photos on the Strand are available on ACT's website.

April, 2013: SF Planning Dept. has approved Elevation Architect's designs for the Alexandria Theater. Built in 1923 by the celebrated Reid Brothers, the 2,000 seat showplace theater later became a three-screen theater in 1976, but closed in 2004. Per the SF Examiner, plans now call for one 221-seat single screen theater and a 7,000 sq. ft restaurant on the second floor. The first floor will be converted to commercial space, and the theater's adjacent parking lot is to become a mixed-use development with 37 units of housing and two levels of underground parking. In addition to historical background and coverage on Cinema Treasures, additional photos on the Alexandria can be found on the Western Neighborhood Project site. See also SFCurbed's coverage thread here. The Conditional Use Application can be read here (pdf).

San Francisco Neighborhood Theater Foundation successfully negotiated an agreement with the owner of Cinema 21 allowing for both Walgreens and a two-screen theater. Walgreens resides on the street-level floor, while the Marina Theater is now housed upstairs with a 264-seat theater as well as an 86-seat theater in the mezzanine area. A concerted neighborhood effort working with the San Francisco Neighborhood Theater Foundation was able to stop the impending loss of the theater in May 2002.

December 12, 2012: On the heels of the Lumiere Theater's recent closure, Landmark Theaters announced that December 27 marks the final night of operation for its Bridge Theater. No details have been provided for the closure, or what may become of the Geary St. venue in operation since 1939. View the SF Examiner December 12 article here. See also photographer Beth LaBerge's Flickr photostream coverage of the Bridge.

September 23, 2012: The Lumiere Theater that opened its California and Polk location in 1967 closes after a failure to reach a new lease with its landlord—a great loss for foreign and art filmlovers that this Landmark location has catered to. For additional information, go here.

Declared a landmark in 2009, The Metro Theater at 2055 Union Street closed in 2006. In February 2012, the Planning Commission approved a plan to seismically retrofit the theater, and convert the interior into a gym run by Equinox Fitness. Per SF Gate, "final plans for the former movie theater, approved earlier this year, include a retractable screen and the option to use the main area as an auditorium space that will be used for movie screenings, presentations, and the like up to 18 times per year."

The Coronet at 3575 Geary, one of San Francisco's largest theaters with 1,350 seats, and the theater that had premiered Star Wars and Bladerunner, closed March 17, 2005. Its owner, The Institute of Aging, a nonprofit health services provider, demolished the theater and adjacent parking lot in 2007, replacing the space with a 150-apartment, six-story senior care facility and campus for IOA. Details can be found here. See also Cinema Teasure's discussion thread and Coronet photos.